If you are interested in shooting games, you can never ignore Block City Wars. It is a game that combines the GTA series of games and graphics of Minecraft, so fans of both series will be surprised by such a killer combo.

Block City Wars is a game by the publisher D-Games Apps, and it is considered GTA 5 in Minecraft version as it has features of both games. When you enter the world of Block City Wars, you can fight with opponents, escape, play as police, and take down evil guys; in short, many interesting things can happen within the gameplay.

The game features 3D pixel graphics such as buildings, vehicles, characters, and helicopters to make it more realistic.

The graphics of Block City Wars are very sharp as they are the same as Minecraft’s graphics. The sound effects given in the game, such as shooting, explosions, the noise of horns, are quite realistic to get mixed up in the pixel 3D world. It looks like Block City Wars has all the means to appeal to a wide range of audiences.

You have to interact with players from all over the world, so your character should stand out according to the specifications. But for continuously using this feature, you should have a consistent internet connection.

Choose a weapon and vehicle

Block City Wars provides you a wide variety of weapons from which you can choose your favorite one. It gives you a strong weapon system to choose from. More than 100 weapons like AK47, MiniGun, sniper rifle, RPG are awarded to the players. Not only pistols and rifles, but pixel guns are also given to use.

Many vehicles are also given in the game, such as sports cars, motorcycles, jets, military helicopters, airplanes, etc. These vehicles and weapons will help you the most while fighting a challenge.

Block City Wars gives you a beautiful 3D world similar to Minecraft, but slightly different, something you have never experienced before. It somehow feels aesthetic for players to feel comfortable with the graphics. The buildings, cars, and even the characters are so realistically beautiful.

The game features many large buildings such as a commercial service center, high-rise buildings, shopping markets, etc., at the start of the game, and you will explore activities with criminals, private parties, and police. You can experience many stories with different characters. You can create relationships with people and also participate in activities with other characters in the game.

Activities in the city

While playing Block City Wars, you will have many missions, and sometimes you even get chased by the police. After completion of a specific mission, the police will immediately search out for you. More cops will appear when you kill a policeman. Killing the police will cause much trouble for you.

You can perform shooting activities, chase cars, fight with other parties. In short, the game is full of several activities for that you never get bored.

Block City Wars has many interesting game modes for you, including online and offline modes. There are choices like deathmatch, free PvP fight, pixel hunter, tank battles, street race, and infection zombie mode.

These diverse modes allow you to communicate well with other characters. A single sandbox mode for players is also there to perform gangster activities.

In this game, players will get to use familiar controls of shooters. There is a button on the left side of the screen, and you can move the characters with that button conveniently. On the right side, there are buttons to shoot, aim or drive through the city. It is something that players will take some time to get familiar with gradually.

The gameplay of Block City Wars is quite interesting and engaging. It has various features to make the players interested, not to mention the variety of weapons we have. Some of the weapons are AK47, RPG, and many others. At the same time, players can go to shops to buy necessary items to use in a mission.

Another important aspect is the transportation means to be used in the game. You can use interesting vehicles such as sports cars, motorbikes, and many other. The controls are very easy to understand, and if you get stuck, you can also explore the map. The gameplay of a single campaign is the same as that of Grand Theft Auto. The player can go through story missions in between the game.

The game allows the players to wander freely and do the missions of their own choice. Block City Wars offer different rewards with various characters. Your only job is to complete the mission given by the bosses. When you complete the mission, you will get a bonus. These rewards will help you in leveling up. Try to do well and earn a lot of rewards in the game.

The procedure to download the Block City Wars MOD APK is given below:

Download this game to enjoy the world of gangsters, sports cars, and exciting fights. You will see these things on every road you drive on. The player must remain conscious as driving in the city because of the shooting area. The people and bosses in the Block City Wars have no specific laws or rules. Fighting and shooting are going on the road, so players must be careful.

It is a game filled with amazing things to explore. Interesting missions are given to complete. It is a game where you would experience the toughest 3D battlegrounds. It gives you sniper rifles, destroyers, and plasma guns. Many other armors are given in this game. Download Block City Wars MOD APK now for interesting gameplay and exciting adventures.

Do we get unlimited lives in the MOD APK version of Block City Wars?

No, the MOD APK version of Block City Wars does not have this feature up until now. The latest version of the game does not allow unlimited lives for players. It only has the feature of unlimited money within the game.

Is the MOD APK version of Block City Wars free to download?

Yes, the game was originally made to download for free. But the MOD APK version is also free of cost. You can easily download it from the above-given download link without paying a single penny.

What are the features of Block City Wars MOD APK?

Block City Wars MOD APK gives you an unlimited amount of money and unlimited ammo to wander around freely in the game and buy things of your own choice. Various kinds of vehicles and weapons are given to use in completing missions and interesting tasks.

Block City Wars MOD APK is a game that is also available to play offline without any internet connection. But to get the unlimited features, you should play this game online for better and smooth performance. 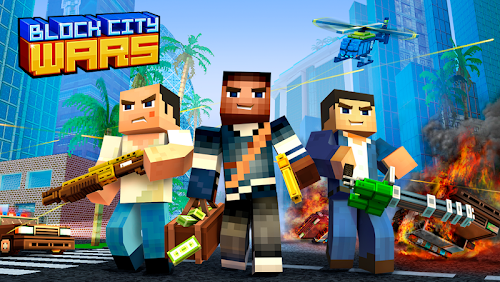